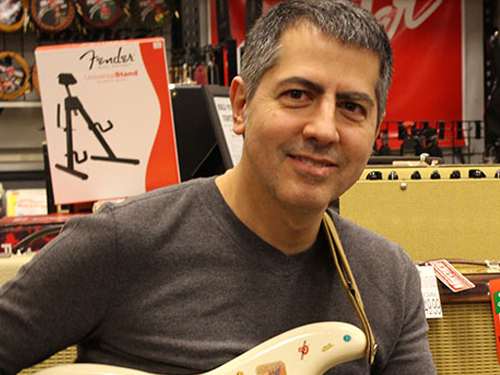 Vincent Corson joined the Music Land staff in 1985. He has been performing and recording professionally in the Maryland area for nearly three decades. He received his degrees from Harford Community College (A.A. in Music), Towson State University (B.S. in Composition and Guitar Performance) and has done graduate work in Musicology at West Chester University.

Over the years, Mr. Corson has helped guide many players of various ages, levels of experience and playing styles pursue their goals. He does not ascribe to one approach or philosophy in teaching but rather one that adapts to the needs of the student. The element of extreme diversity from one student to the next makes each lesson a challenge. Mr. Corson understands the value of balancing fundamental study with the student’s musical interests. The success he’s shown in teaching is evidenced by the many students who have successfully acquired their goals, be it personal or academic.

In addition to studying and performing Mr. Corson spent more than ten years studying Science and Medicine. He has volunteered with local fire companies and hospitals, worked at UM Shock Trauma Center as a trauma technician, and received his nursing degree.